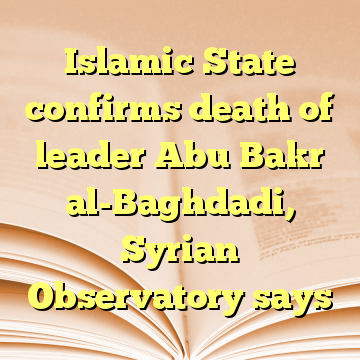 “Top tier commanders from IS who are present in Deir Ezzor province have confirmed the death of Abu Bakr al-Baghdadi, emir of the Islamic State group, to the Observatory,” Rami Abdel Rahman, director of the monitoring group, told AFP.

Russia’s Defence Ministry said in June that it might have killed Baghdadi in a May airstrike on a gathering of Islamic State commanders outside Raqqa, Syria, but U.S. and Iraqi officials remained skeptical, saying they had no evidence to corroborate the claim. [ Source: Washington Times ]