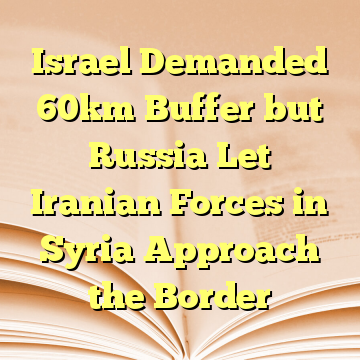 (Worthy News) – Israel asked Russia and the United States to prevent an Iranian presence, or that of any Shi’ite militia operating under Iranian influence, in southern Syria near the Israeli border in any cease-fire agreement. Israel presented its demand during the talks that preceded the cease-fire agreement in July – but the Russians refused.

The buffer zone demanded by Israel in southern Syria is from 60 to 80 kilometers (about 37 to 50 miles) from the border on the Golan Heights, to the west of the road connecting Damascus and the city of Al-Suwayda in southwest Syria.

The Russians agreed only to promise that the Iranians and their allies would not come any closer to Israel than five kilometers from the armistice lines between those of President Bashar Assad’s regime and the rebels. Because the Syrian government still controls the northern part of the Syrian side of the Golan Heights, from the city of Quneitra north toward Damascus, this means in practice the Russians only promised to keep the Iranians away from the actual border. [ Source: Ha’aretz (Read More…) ]