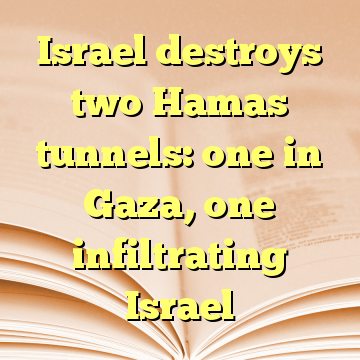 One tunnel that was identified by the army several weeks ago ran from Rafiah in the southern Gaza Strip into the Eshkol Regional Council inside Israel.

“The IDF foiled an attempt by the Hamas terrorist organization to rebuild an offensive terrorist tunnel in Rafiah in the southern Gaza Strip,” IDF Spokesperson Brig.-Gen. Ronen Manelis said. He added that the tunnel had not posed a threat to residents in the area. [ Source: Jerusalem Post (Read More…) ]