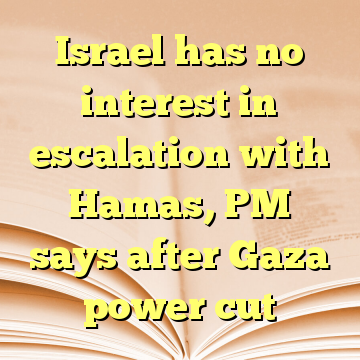 (Worthy News) – Israel has no desire for an altercation with Hamas, Prime Minister Benjamin Netanyahu said on Tuesday, in the wake of a cabinet decision this week to reduce the power supply to Gaza.

The cabinet made the decision after the Palestinian Authority announced it would stop paying Hamas’ monthly electricity bill. Hamas warned on Monday that the power cuts would “lead to an explosion.”

“The Israeli occupation’s decision to reduce electricity to the Gaza Strip at the behest of PA President Mahmoud Abbas is catastrophic and dangerous,” Hamas spokesman Abdel Latif al-Qanou said in an official statement. “It will hasten the deterioration of the situation and its explosion in the strip.”