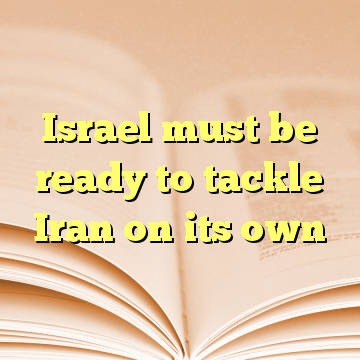 (Worthy News) – Israel must ask the international community to stop Iran’s nuclearization but prepare to do the task on its own in case the world fails, Bayit Yehudi leader Naftali Bennett said in an interview with The Jerusalem Post on Sunday.

Bennett, who is a member of Prime Minister Benjamin Netanyahu’s security cabinet, spoke before a meeting of the forum, in which the prime minister reported about his meetings with US President Donald Trump and other world leaders and his progress on the Iranian issue. The meeting was held a day after Iran tested a ballistic missile capable of reaching Israel, as security cabinet members backed Netanyahu’s call at the UN last week to either scrap or change the nuclear deal with Iran.

“On the one hand, we need to persuade the US to apply paralyzing sanctions of the highest level as soon as possible,” Bennett said. “Iran must be forced to choose between the nuclear path and a prosperous economy. Since the Iran deal, they haven’t been presented that option. At the same time, Israel must prepare for the possibility that the US and the world won’t be convinced by getting ready to defend ourselves by ourselves.” [ Source: Jerusalem Post (Read More…) ]