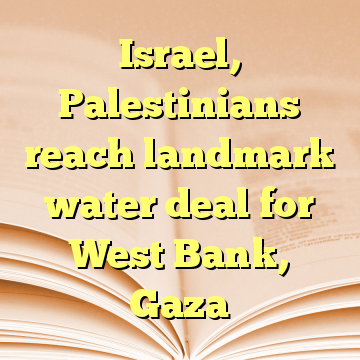 (Worthy News) – Israel and the Palestinian Authority on Thursday announced an agreement that will provide millions of cubic meters of drinking water to the Palestinians from a desalination process.

While the Palestinians made plain that the deal, brokered by US President Donald Trump’s envoy Jason Greenblatt, has no impact on final-status issues in the Israeli-Palestinian peace process, Greenblatt hailed it as a “harbinger of things to come.” At a joint press conference in Jerusalem, however, Greenblatt refused to take any questions regarding his bid to relaunch peace negotiations

The agreement announced Thursday is part of a larger trilateral agreement for the construction of a 220-kilometer (137-mile) pipeline transferring water from the Red Sea to the Dead Sea — the lowest body of water on earth — to benefit Israelis, Jordanians and Palestinians, and replenish the dwindling Dead Sea. As the water runs down the gradient it will be used to generate electricity that will also power a desalination plant to produce drinking water. [ Source: Times of Israel ]