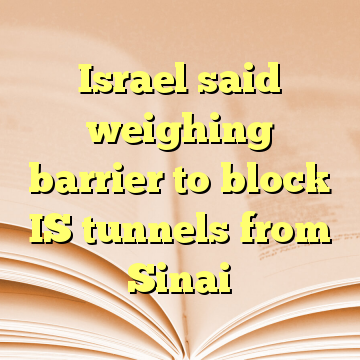 (Worthy News) – Israel was reportedly considering building an underground barrier along its Egyptian border to prevent the Islamic State terror group in Sinai from digging cross-border attack tunnels into Israel.

The army was weighing up whether to extend the barrier currently being constructed around the Gaza Strip southward to protect the Israeli towns in the Eshkol region, the Ynet news website reported on Friday.

Despite having focused the vast majority of its efforts on waging a bloody insurgency against the Egyptian army in recent years, IS in Sinai has long used saber-rattling and small scale attacks against Israel to boost its credentials. Jihadists have fired rockets at Israel, and in February the Egyptian army destroyed six tunnels which ran between Gaza and Sinai. [ Source: Times of Israel (Read More…) ]