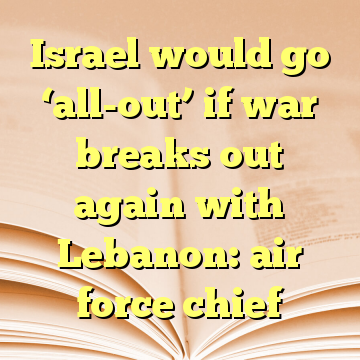 (Worthy News) – Israel would use all its strength from the start in any new war with the Lebanese militant group Hezbollah, the chief of the Israeli air force said on Wednesday, sending a firm warning a decade after their last conflict.

At the annual Herzliya security conference near Tel Aviv, Major-General Amir Eshel said qualitative and quantitative improvements in the air force since the 2006 Lebanon war meant it could carry out in just two or three days the same number of bombings it mounted in those 34 days of fighting.

“If war breaks out in the north, we have to open with all our strength from the start,” he said, pointing to the likelihood of international pressure for a quick ceasefire before Israel can achieve all its strategic goals. [ Source ]