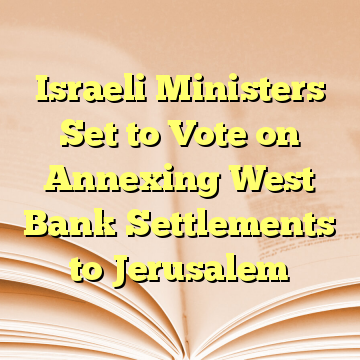 (Worthy News) – Ministers will vote Sunday on annexing Israeli local authorities beyond the Green Line to Jerusalem following several long delays. The bill is expected to win the support of the panel and be sent to the Knesset floor for approval.

Cabinet ministers were told Wednesday that the so-called “Greater Jerusalem Bill” will be brought to a vote at Sunday’s meeting of the Ministerial Committee for Legislation.

Prime Minister Benjamin Netanyahu, who previously delayed the vote on the bill, initially agreed to promote it in July following an attack on the Temple Mount that killed two police officers. But the bill never made it to the panel for a vote. [ Source: Ha’aretz (Read More…) ]