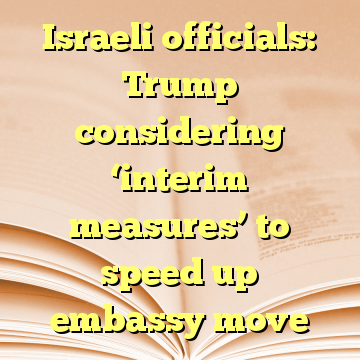 (Worthy News) – Sources in the Prime Minister’s Office on Thursday said the US is considering “interim measures” that would allow for its embassy to be moved to Jerusalem within a year, clarifying comments made earlier by Prime Minister Benjamin Netanyahu that were subsequently rebuffed by US President Donald Trump.

Netanyahu, on a visit to India, had earlier this week expressed confidence that Trump would quickly fulfill his pledge to relocate the embassy, telling reporters it would happen “much faster than people think, within a year from today.”

But when asked about the prime minister’s comment in an interview with the Reuters news agency, Trump said Netanyahu was mistaken. [ Source: Times of Israel (Read More…) ]