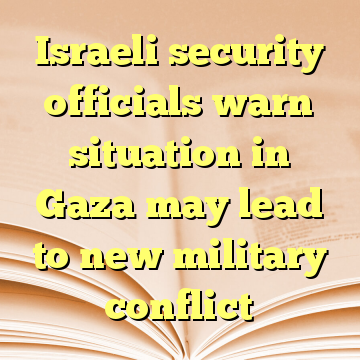 (Worthy News) – Senior Israeli security officials have told the Security Cabinet that the current situation in Gaza resembles the one that existed just before Operation Protective Edge in 2014, warning that it might lead to a new military conflict with Hamas.

The officials based their assessment on factors such as the rapidly-worsening humanitarian crisis in the Gaza Strip, a high unemployment rate, the cutting of funds from Qatar and the general disappointment of Gazans from the failing reconciliation between Hamas and Fatah.

Above all, the officials cited the US recognition of Jerusalem as a major event that has prompted Hamas to unleash harsh statements against Israel in order to preserve its power. [ Source: Jerusalem Online (Read More…) ]