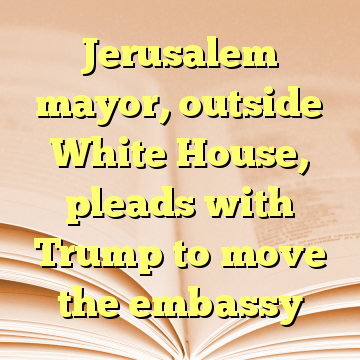 (Worthy News) – Jerusalem Mayor Nir Barkat made an impassioned appeal to US President Donald Trump asking him to recognize Jerusalem as Israel’s capital and to move the US embassy to the city.

In a video released on social media Monday, Barkat is seen standing in front of the White House, where he thanked Trump for his “commitment and intention to officially recognize Jerusalem as the capital of Israel.”

The mayor described Jerusalem as “the beating heart and soul of the Jewish people for more than 3,000 years,” and said that recognizing it as the capital “will send a very clear message to the world that the United States stands with the Jewish people and the State of Israel.” [ Source: Times of Israel (Read More…) ]