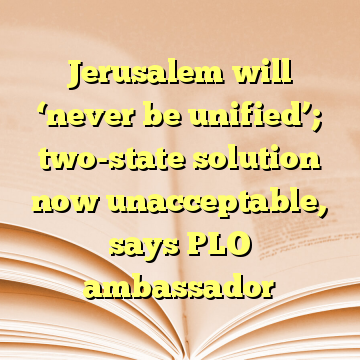 (Worthy News) – The Trump administration’s push to have Jerusalem officially recognized as the capital of Israel is destined to fail and will only exacerbate tensions between the U.S and the region, the top Palestinian diplomat in Washington said Thursday.

“Jerusalem is not going anywhere. It is not united. It will never be united” solely as the Israeli capital, said Ambassador Husam Zomlot, head of the Palestinian Liberation Organization’s General Delegation to the U.S.

Palestinians want East Jerusalem to be the capital of their independent nation in any two-state deal with Israel, and have complained bitterly that Mr. Trump’s unilateral move last month to recognize the city as Israel’s capital and begin moving the U.S. embassy there have short-circuited the negotiations. [ Source: Washington Times (Read More…) ]