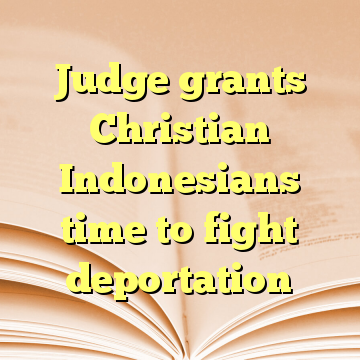 (Worthy News) – A federal judge on Thursday blocked the government from deporting dozens of Christian Indonesians who fear persecution if returned home, until they’re given a chance to fight their removal.

U.S. District Judge Patti Saris in Boston said 50 Indonesians living illegally in New Hampshire must be given time to reopen their immigration cases and argue that the conditions in their home country have changed.

“This opinion may literally save lives,” said Lee Gelernt, an attorney for the Indonesians. “As the court recognized … this country’s laws do not permit the government to send people back to persecution or torture,” said Gelernt, of the American Civil Liberties Union’s Immigrants’ Rights Project. [ Source: Fox News (Read More…) ]