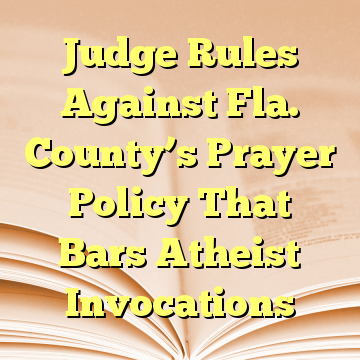 (Worthy News) – A federal judge has ruled against a Florida county government’s prayer policy that bans atheist invocations from its public meetings.

In a decision released Saturday in Williamson v. Brevard County, the U.S. District Court for the Middle District of Florida concluded that the Brevard County Board of Commissioners was unlawfully limiting who could give invocations at their meetings.

“For a governmental entity to require, or attempt to require, ‘religious’ content in invocations is, in effect (or, at best, but a step removed from) that entity composing prayers for public consumption or censoring the content of prayer,” concluded the court. [ Source: Christian Post (Read More…) ]