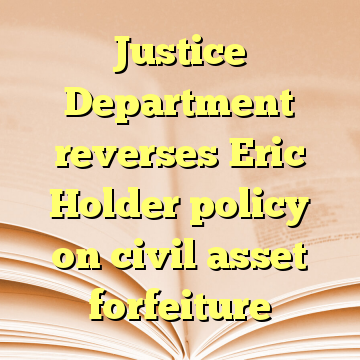 Holder’s memo told state and local jurisdictions that federal officials would restrict “adoptive” forfeitures, which is when the federal government adopts property taken by law enforcement authorities and forfeits it under federal law. As a result of the process, local agencies can get back up to 80 percent of the proceeds of forfeited property, while the federal government keeps at least 20 percent.

Sessions’ new policy also sets out rules for state and local police when less than $10,000 in assets are seized. If authorities want to pursue adoptive forfeitures in these cases, they must meet one of the following conditions: getting a state warrant, making an arrest related to the seizure, seizing contraband such as drugs along with the money, or when the owner of the property has confessed to a crime.  [ Source:Washington Times (Read More…) ]