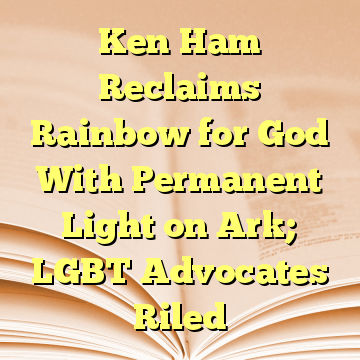 (Worthy News) – Ken Ham, president of the Answers in Genesis Christian ministry that built the $100 million Ark Encounter biblical theme park in Williamstown, Kentucky, riled LGBT advocates Tuesday when he announced that they will be reclaiming the rainbow for God with permanent rainbow lights for their life-sized Noah’s Ark replica.

“We now have new permanent rainbow lights at the Ark Encounter so all can see that it is God’s rainbow and He determines its meaning in Genesis 6,” Ham said in a statement on Facebook. “The rainbow is a reminder God will never again judge the wickedness of man with a global Flood — next time the world will be judged by fire.

“The Ark is lit permanently at night with a rainbow to remind the world that God owns it and He decreed it’s a sign of His covenant with man after the Flood — Christians need to take back the rainbow as we do at the Ark Encounter,” he added. [ Source:Christian Post (Read More…) ]