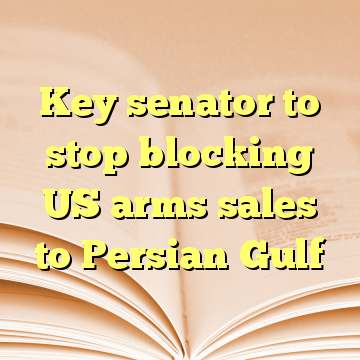 (Worthy News) – The United States is poised to let Persian Gulf nations resume buying American-made lethal weapons after a key U.S. senator said he would stop blocking the sales, even though the Qatar diplomatic crisis that prompted the freeze is no closer to being resolved.

Last year, Senate Foreign Relations Committee Chairman Bob Corker said he was putting a “blanket hold” on sales to Gulf Cooperation Council countries, aiming to put pressure on Qatar, Saudi Arabia, the United Arab Emirates and others to resolve their dispute. But Corker, in a letter to Secretary of State Rex Tillerson released Thursday, acknowledged “there still isn’t a clear path to resolving the GCC rift.”

“Given that weapons sales are part of our security cooperation with these states, I am lifting my blanket hold on sales of lethal military equipment to the GCC,” wrote Corker, R-Tenn. He said he would start letting the sales proceed if the Trump administration could make the case that selling the weapons helps combat support for terrorism. [ Source: Washington Times (Read More…) ]