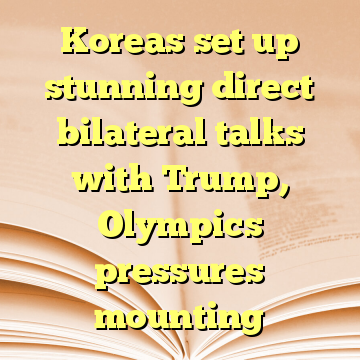 (Worthy News) – North and South Korea are suddenly on a fast track to direct bilateral talks without the United States or China — an unexpected development at a moment of heightened tensions that intelligence sources say is being driven by several factors, including Pyongyang’s desire to sidestep Trump administration-backed sanctions.

A day after President Trump bluntly warned the North about the U.S. military’s ability to respond with overwhelming force to any nuclear attack from Pyongyang, North Korean leader Kim Jong-un reopened a direct cross-border communication channel with South Korea for the first time in nearly two years Wednesday, as the rivals explored the possibility of direct talks and diplomatic overtures after months of acrimony and fears of war.

Mr. Kim’s offer, which was read by a senior Pyongyang official on state TV, followed a South Korean offer on Tuesday of high-level talks with North Korea to find ways to cooperate on next month’s Winter Olympics in the South, among other issues, The Associated Press reported. [ Source: Washington Times (Read More…) ]