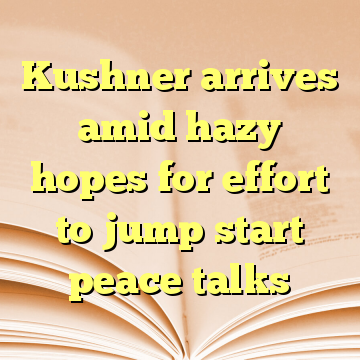 (Worthy News) – A high level US delegation including senior White House adviser Jared Kushner arrived in Israel late Wednesday, ahead of meetings with Palestinian and Israeli leaders aimed at looking for way to jumpstart peace talks.

The visit’s goal, a White House source told Politico, is to “focus on the path to substantive Israeli-Palestinian peace talks, combating extremism, the situation in Gaza, including how to ease the humanitarian crisis there.”

Trump, the source added, “believes that the restoration of calm and the stabilized situation in Jerusalem after the recent crisis on the Temple Mount/Haram al-Sharif has created an opportunity to continue discussions and the pursuit of peace.”

Before coming to Israel, the American met with leaders from the United Arab Emirates, Jordan, Qatar and Saudi Arabia. On Wednesday, they sat down with Egyptian President Abdel Fattah al-Sisi. This marks Kushner’s third visit to the Middle East since assuming his role as Trump’s advisor. [ Source (Read More…) ]