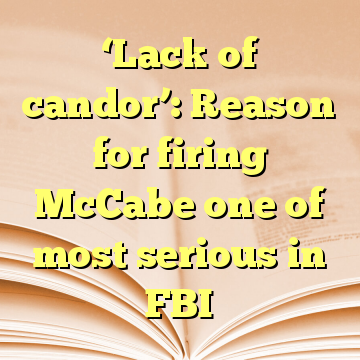 (Worthy News) – When Attorney General Jeff Sessions accused former FBI Deputy Director Andrew McCabe of “lack of candor,” he was lodging one of the most damning accusations for a bureau man to have lodged against him.

While much of Washington has been focused on the politics of the firing, which came 48 hours before the 21-year FBI veteran was set to officially retire, agents focused on the seriousness of the breach of which Mr. McCabe stands accused.

One of an FBI agent’s most important jobs is testifying to the truthfulness of investigations in open court. Defense attorneys are granted access to any disciplinary action or investigation taken against a witness through discovery. That makes the agent’s credibility a strong target for sharp attorneys and can sink testimony and a case. [ Source: Washington Times (Read More…) ]

The post ‘Lack of candor’: Reason for firing McCabe one of most serious in FBI appeared first on Worthy Christian News.