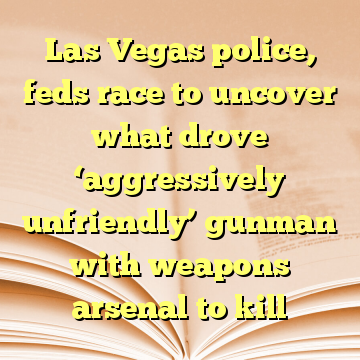 (Worthy News) – Law enforcement officials were working Monday to determine what may have motivated a gunman described as ‘aggressively unfriendly’ — with an arsenal of weapons — to kill at least 59 people and wound more than 520 enjoying a country music festival on the Las Vegas Strip.

The killer, identified as 64-year-old Stephen Paddock of Mesquite, Nev., was a gambling multimillionaire who made much of his money investing in real estate, according to his brother, Eric, who added that he had no reason to believe the gunman had run into financial trouble.

Investigators uncovered 19 firearms, explosives and several thousand rounds of ammunition at the gunman’s Mesquite home, police said. In addition, authorities found 23 firearms in Paddock’s hotel room. The weapons consisted of a mixture of handguns and long rifles, which, according to Lombardo, traveled up to his hotel suite through 10 different suitcases. [ Source: Fox News (Read More…) ]