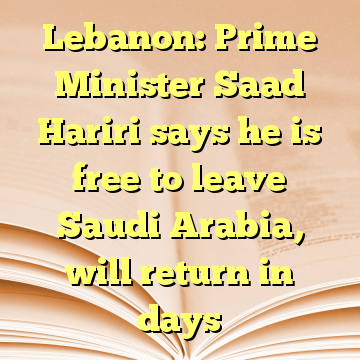 (Worthy News) – Saad Hariri, who resigned as Lebanon’s Prime Minister on November 4, said on Sunday that he is free to leave Saudi Arabia, refuting claims that Riyadh had put him under house arrest.

“I am free here [in Saudi Arabia]. If I want to travel tomorrow, I will,” Hariri told Future Television, a broadcaster close to his political party. “I’ll return to Lebanon very soon.”

It was his first television appearance since his shock resignation announcement last week during a visit to Saudi Arabia. [ Source: Deutche Welle (Read More…) ]