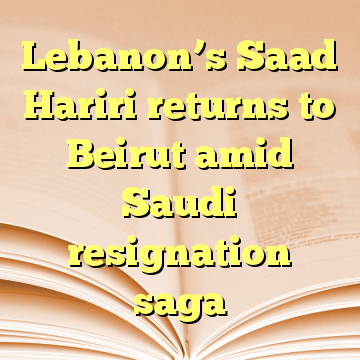 (Worthy News) – Saad Hariri returned to Lebanon late Tuesday for the first time since he stunned his country by announcing from Saudi Arabia that he was quitting as prime minister more than two weeks ago.

His resignation, made in an uncomfortable televised statement from Riyadh, set off an international political crisis involving Paris and Washington, who were left without one of their chief partners in a region swirling in conflict.

Hariri left Saudi Arabia for Paris on Saturday by invitation of French President Emmanuel Macron, before traveling on to Beirut by way of Egypt and Cyprus on Tuesday. [ Source: UK Telegraph (Read More…) ]