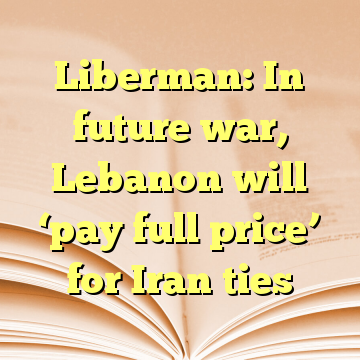 Speaking at an annual conference held by Tel Aviv University’s Institute for National Security Studies, Liberman said that Lebanon will be held to account in a future war because, led by the terrorist Hezbollah group, it has “sacrificed its national interests by subjugating fully to Iran.”

“Lebanon’s army and Hezbollah are the same — they will all pay the full price in the event of an escalation,” Liberman said. “If a conflict does break out in the north, ‘boots on the ground’ remains an option. We won’t allow scenes like in 2006, where we saw citizens of Beirut on the beach while Israelis in Tel Aviv sat in shelters.”