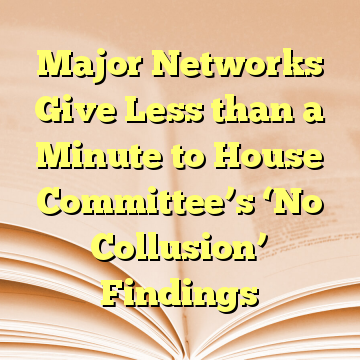 (Worthy News) – On Monday, the House Intelligence Committee closed its inquiry into Russian meddling in the 2016 presidential election, much to the chagrin of the liberal media. The committee confirmed that the Russians were indeed trying to cause chaos in the election, claimed they weren’t out to help candidate Donald Trump specifically and that there was no collusion between the Trump campaign and Russia. But during their evening broadcasts, ABC and CBS downplayed the findings while NBC ignored them.

CBS Evening News only gave 31 seconds to the House committee’s findings. “Republicans on the House Intelligence Committee said there was no collusion or coordination between the Trump campaign and Russia during the 2016 election,” reported anchor Jeff Glor. “They also say that while Russia tried to interfere with the elections, they do not agree with U.S. intelligence that the Russians were trying to help Donald Trump.”

The post Major Networks Give Less than a Minute to House Committee’s ‘No Collusion’ Findings appeared first on Worthy Christian News.