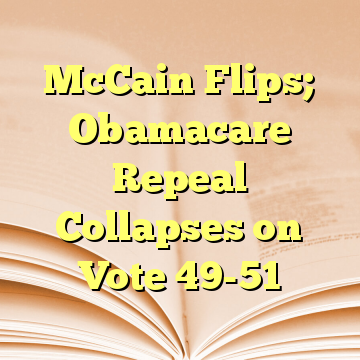 The decision by McCain to vote no came after weeks of brinkmanship and after his dramatic return from cancer treatment to cast the 50th vote to start debate on the bill earlier this week. The GOP’s ‘skinny’ repeal bill was defeated 49-51, falling just short of the 50 votes needed to advance it. Republicans Susan Collins of Maine and Lisa Murkowski also voted against it.

It wasn’t immediately clear what the next steps would be for the Republicans. The repeal effort had appeared to collapse several times before, only to be revived. And several Republicans pleaded for their colleagues not to give up, even as President Donald Trump blasted the vote. [ Source (Read More…) ]

3 Republicans and 48 Democrats let the American people down. As I said from the beginning, let ObamaCare implode, then deal. Watch!