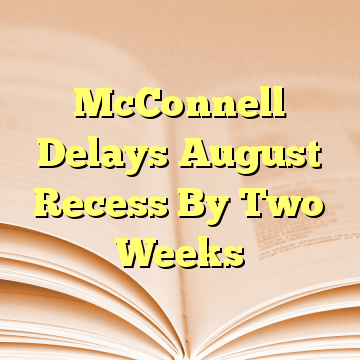 (Worthy News) – Senate Majority Leader Mitch McConnell (R., Ky.) announced Tuesday that he is delaying the traditional August recess by two weeks as his party faces a list of agenda items to accomplish.

“In order to provide more time to complete action on important legislative items and process nominees that have been stalled by a lack of cooperation from our friends across the aisle, the Senate will delay the start of the August recess until the third week of August,” McConnell said in a statement.

The Republicans are trying to push through their agenda on issues such as repealing and replacing Obamacare, tax reform, and infrastructure. The Washington Examiner reported Tuesday on a letter sent by eight Republicans to McConnell urging him to delay the recess in order to not stymie the party’s agenda. [ Source: Washington Free Beacon ]