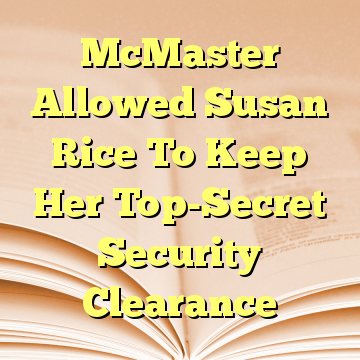 (Worthy News) – Almost one month after it was disclosed that former President Obama’s National Security Adviser Susan Rice was unmasking members of President Trump’s team and other Americans, Trump’s own national security adviser, H.R. McMaster, sent an official letter giving her unfettered and continuing access to classified information and waiving her “need-to-know” requirement on anything she viewed or received during her tenure, Circa has confirmed.

The undated and unclassified letter from McMaster was sent in the mail to Rice’s home during the last week of April. Trump was not aware of the letter or McMaster’s decision, according to two senior West Wing officials and an intelligence official, who spoke to Circa on condition that they not be named.

“I hereby waive the requirement that you must have a ‘need-to-know’ to access any classified information contained in items you ‘originated, reviewed, signed or received while serving,’ as National Security Adviser,” the letter said. The letter also states that the “NSC will continue to work with you to ensure the appropriate security clearance documentation remains on file to allow you access to classified information.” [ Source (Read More…) ]