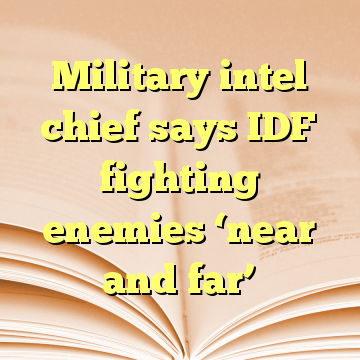 (Worthy News) – In the wake of reports that Israel struck a chemical weapons facility in southern Syria, Military Intelligence chief Maj. Gen. Herzl Halevi on Thursday warned that Israel was consistently working to combat its enemies ‘both near and far.’

“We are dealing with these threats, both near and far, with determination and our enemies in every arena know very well the combination of (our) precise intelligence and operational capabilities,” he said at a memorial for former president Chaim Herzog in Tel Aviv.

“The serious security threats against Israel from armed groups are being aided by Iran, which are serious, but not existential threats,” Halevi said. “Iran is working to position itself on our borders with Syria, Lebanon and Gaza, flooding those borders with deadly ideology.” [ Source (Read More…) ]