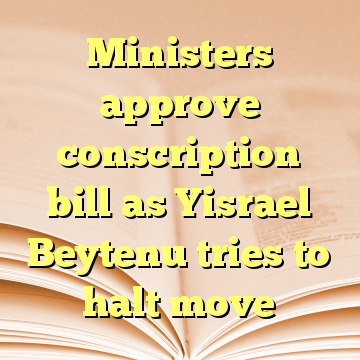 (Worthy News) – A bill proposing to exempt members of the ultra-Orthodox community from conscription to the IDF, which is at the center of a fierce government crisis that could lead to early elections, passed its first legislative hurdle on Monday, though it wasn’t initially clear whether that reflected an agreement between coalition partners.

The Knesset’s Ministerial Committee for Legislation approved the law, pushed by the ultra-Orthodox parties but opposed by both Defense Minister Avigdor Liberman and, reportedly, by Attorney General Avichai Mandelblit, who said he could not defend its current wording in the High Court of Justice.

Yisrael Beytenu Minister Sofa Landver filed an appeal with the cabinet against the bill, meaning either the committee will need to meet again or the cabinet will need to cancel her appeal. Coalition parties may appeal a decision made by the committee and demand it be brought before the cabinet for a vote by all government ministers. That vote is expected to take place over the phone in the next few hours. [ Source: Times of Israel (Read More…) ]