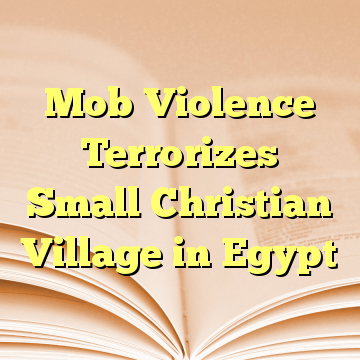 (Worthy News) – International Christian Concern (ICC) has learned that on September 14, a Muslim mob in the village of Tawa in Minya attacked the local Coptic Christian community. Homes, businesses, and cars were destroyed and three Copts suffered minor injuries. These attacks were in retaliation against a Facebook post which was widely shared among Christians. The author, a 22-year-old Christian resident of Tawa named Bassem, had written the post in May following the deadly attack by Islamic extremists against a caravan of Coptic Christians traveling to the Monastery of St. Samuel the Confessor.

Bassem wrote on May 27: “Are we (Copts) Egyptians not from Egypt? No matter that you try to hurt us, one day all your ways will fail. Do you think that I cry? Never! I don’t cry because I trust in Jesus very much, I prostrate to him and he loves me. He never leaves me one day. When you demolish the homes of his children, you attack himself. I ask Jesus to touch your heart and change you. Our Lord knows and see what is happening to us. Continue and increase your terrorism, but I’m not afraid because it is a fearful thing to fall into the hands of God.”

At the end of the post, Bassem shared photos of Salafi Sheikhs whom he believed bore responsibility for inciting extremist violence against Christians. Bassem deleted the post the next day, on May 28, but not before it had spread across social media. It wasn’t until four months later that a Muslim villager in Tawa saw the post on the Facebook page of Bassem’s friend, Mena. The post then spread among some of the Muslim villagers, who considered the post an insult to Islam.

Essam, a Christian resident in Tawa and an eyewitness to the mob’s violence, told ICC, “Many Muslims gathered and the mob began to attack Christian homes and shops. They were pelting stones at the homes while shouting ‘Allah Akbar.’ They hurled bricks and stones at Mar Girgis (St. George) Coptic Orthodox Church despite the presence of some security guards who had been assigned to guard the church, but the guards couldn’t confront the huge number of the mob. The police then arrived in the village, controlled the situation, and arrested Muslim villagers. The security forces have now deployed across the streets of the village.”

On September 15, the governor of Mina and the security director toured the village while accompanied by a number of parliamentarians as well as Islamic and Christian clerics. The same day, the prosecution detained 19 Muslims pending an investigation into the violence. The prosecution also ordered the arrest of Bassem and Mena, charging them with insulting Islamic figures and inciting sectarian strife. Both Christian men have fled the village.

Claire Evans, ICC’s Regional Manager, said, “Egypt’s Coptic Christian community has greatly suffered at the hands of Islamic extremists. In Tawa, Christian men, women, and children were once again terrorized by those who have no desire for peace. This violence is unacceptable. We are relieved to learn that Bassem and Mena were not injured by the mob, but alarmed about the prosecution’s decision to charge them although they were clearly targets of the mob’s violence. We pray for their safety and that of their fellow villagers. The authorities need to be more intentional in protecting the lives and property of Egypt’s Christians.”