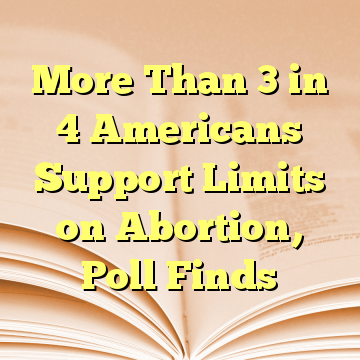 (Worthy News) – About 76 percent of Americans support stricter laws on abortion, according to a new Marist Poll, a finding that is part of a consistent trend in data the company has collected in the past decade.

While 51 percent of respondents identified as pro-choice, 60 percent of them said they support limitations on abortions, such as backing a ban on the procedures after 20 weeks of pregnancy and opposing the use of tax dollars to pay for them.

About 61 percent of Democrats, 92 percent of Republicans, and 78 percent of independents said they want significant restrictions on abortion, according to the poll. [ Source: Daily Signal (Read More…) ]