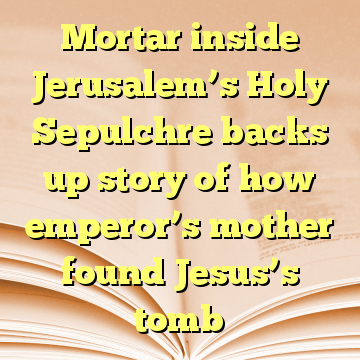 (Worthy News) – The discovery of late-Roman era mortar under a slab of marble at the site which some believe to be the burial place of Jesus Christ backs up contemporary accounts of the tomb’s discovery, scientists say.

According to historical accounts, the Emperor Constantine — who was the first Roman ruler to convert to Christianity — discovered the rocky tomb with assistance from his mother, Helena, between 325 and 326 AD, buried beneath a temple to the Roman goddess Venus in Jerusalem

Today the tomb lies at the heart of Holy Sepulchre church in the Old City, where it is visited regularly by millions of pilgrims and tended by priests from several Christian denominations under strict rules still in place from the Ottoman era. [ Source: ABC News (Read More…) ]