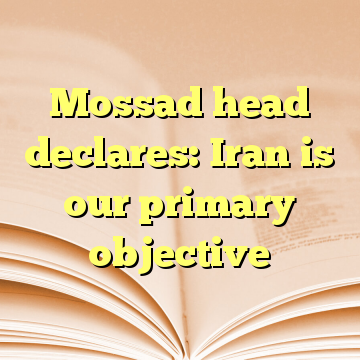 (Worthy News) – Iran is the primary target of the Mossad’s actions, which number in the hundreds and thousands each year, Mossad head Yossi Cohen said on Monday.

Cohen was speaking at the Mossad headquarters alongside Prime Minister Benjamin Netanyahu, during a ceremony where Netanyahu initiated what he said would be a new annual tradition of handing out six citations of merit to Mossad employees who took part in operations.

Cohen said the spy organization works within the framework of a multi-year plan that focuses on the top national, security and diplomatic priorities.

“The objectives of the Mossad are clear: Iran continues to hold onto its vision of attaining significant nuclear capabilities, so that it will attain nuclear military capabilities,” he said. [ Source: Jerusalem Post (Read More…) ]