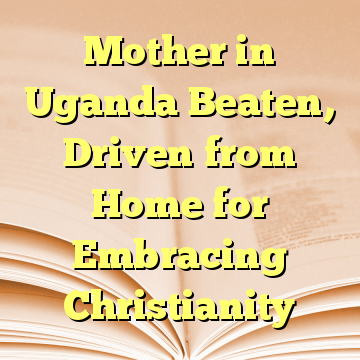 (Worthy News) – A woman in eastern Uganda who put her faith in Christ is in hiding after her husband beat her for leaving Islam, sources said.

Sophia Nakisaala, 35, turned to Christ on Aug. 7 after her daughter was healed when a street preacher she’d heard in Bulopa village, Kamuli District, prayed for her. Kamuli is 143 kilometers (88 miles) northeast of Kampala, the capital.

Nakisaala was on her way to Kamuli General Hospital with her ill 5-year-old daughter when she stopped to listen to the evangelist from an area church (undisclosed for security reasons). She later met with the street preacher, who prayed for her daughter.

“My child got healed instantly from high fever, which had caused several convulsions,” Nakisaala told Morning Star News by phone. “The evangelist shared with me about Issa [Jesus], whom he said to be the healer and Savior. I then decided to accept Him as my Lord and Savior and then returned back home.” [ Source (Read More…) ]