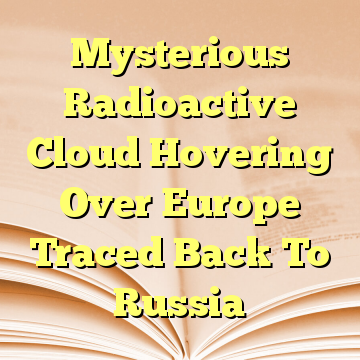 (Worthy News) – Authorities traced the origins of a mysterious radioactive cloud that passed over some 28 countries in Europe recently. First discovered over Italy in early October, the cloud was found to have originated sometime in September near the border of Russia and Kazakhstan.

A report issued by France’s Radioprotection and Nuclear Safety Institute (IRSN) detailed the findings. The radioactivity was discovered after monitors in Italy picked up on the ruthenium-106 isotope in the air.

“It’s somewhere in South Russia,” health director for the IRSN Jean-Christophe Gariel told NPR of the origins, noting that it was likely from between the Volga River and the Ural Mountains. [ SourceL IBT (Read More…) ]