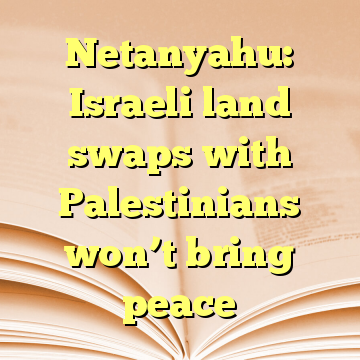 (Worthy News) – Prime Minister Benjamin Netanyahu insisted on Tuesday that any future peace agreement reached with the Palestinians must include an Israeli military presence in the West Bank and offered insight on security concerns the government may have following a prospective deal.

During an interview with Army Radio, Netanyahu said that “In any peace agreement we [Israel] will have to maintain military control of all the territory west of the Jordan River. This is the truth and I will continue saying this truth.”

Netanyahu indicated that an Israeli military withdraw from all areas of the West Bank would likely create a vacuum prone to takeover by extremists, who could pose a threat to Israeli security. [ Source ]