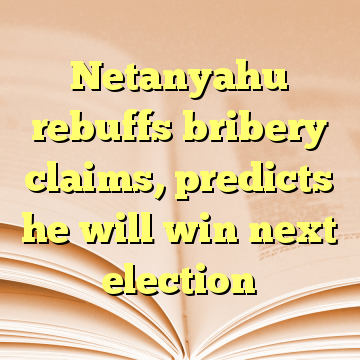 (Worthy News) – In an impassioned 10-minute rebuttal to police recommendations to indict him on bribery and breach of trust charges, Prime Minister Benjamin Netanyahu told the nation Tuesday night that not only will this government complete its term, but he will again be re-elected in 2019.

Netanyahu said that the only thing that has motivated him since his days as an officer in the elite Sayeret Matkal, through his days as ambassador to the UN, finance minister and for the last nine years as prime minister, is the good of the country.

If he had wanted to enrich himself, Netanyahu said, “If that is what motivated me, I would a long time ago have been in a different place.” [ Source: Jerusalem Post (Read More…) ]