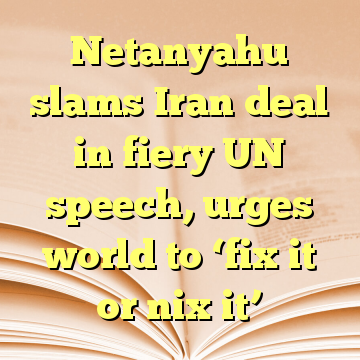 (Worthy News) – Prime Minister Benjamin Netanyahu harshly condemned the Iran nuclear deal in a speech at the UN General Assembly on Tuesday, warning that the accord will pave the way for Iran to obtain nuclear weapons if it is not scrapped or altered.

After praising Donald Trump’s address earlier in the day from the same podium, in which the US president called the Islamic Republic a “murderous” regime and the nuclear deal an “embarrassment,” Netanyahu said the 2015 accord strengthened Iran’s nuclear program and posed a grave threat to the entire world.

“Imagine the danger of hundreds of nuclear weapons in the hands of a vast Iranian Islamist empire, with the missiles to deliver them anywhere on earth,” he said. [ Source:Times of Israel (Read More…) ]