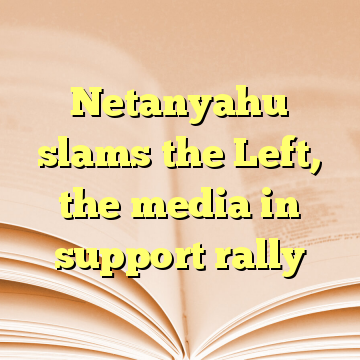 (Worthy News) – Surrounded by supporters in a rally organized by his close confidant MK David Bitan, Prime Minister Benjamin Netanyahu slammed the media and the left wing on Wednesday evening, accusing them of trying to “overthrow” him.

Netanyahu, who is plagued by two criminal investigations against him and others against his wife and close associates, was warmly welcomed by some 2,000 Likud supporters, including many of the party’s ministers and MKs who attended following threats by rally architect Bitan he would “settle the score with them in the primaries.” Some of the Likud officials even phoned activists themselves, asking them to come and offering transportation services.

Delivering the keynote address at the event, which was organized at his request, the prime minister accused unnamed others of trying to bring down his government in undemocratic ways. [ Source (Read More…) ]