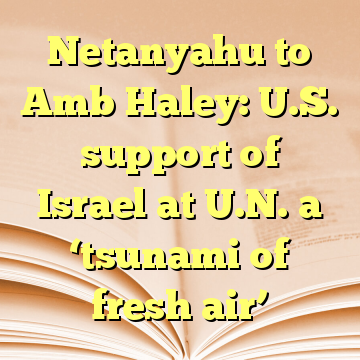 (Worthy News) – Meeting with US Ambassador to the United Nations Nikki Haley in New York on Thursday, Prime Minister Benjamin Netanyahu said American support of Israel at the UN was not just a breath of fresh air but “a tsunami” of it.

Thanking Haley for America’s “defense of Israel,” Netanyahu also added that US President Donald Trump’s focus on Iran shows he is “focused on the right thing.”

“As you well know, I think that’s what drives everyone now,” he said, referring not only to American and Israeli policies towards the Islamic Republic, but to states around the region and the globe as well. [ Source: Jerusalem Post (Read More…) ]

The post Netanyahu to Amb Haley: U.S. support of Israel at U.N. a 'tsunami of fresh air' appeared first on Worthy Christian News.