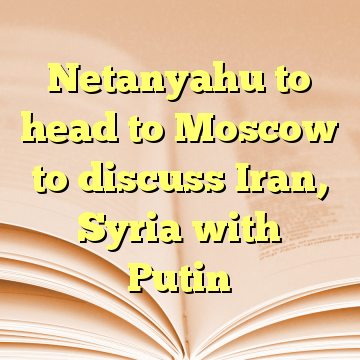 (Worthy News) – Prime Minister Benjamin Netanyahu is headed to Moscow on Monday for a whirlwind trip, during which he is set to meet Russian President Vladimir Putin and visit an exhibition on the Holocaust.

On the agenda of his meeting with Putin will be Iran’s attempts to entrench itself militarily in Syria, since Moscow is one of the key allies of both Damascus and Tehran. Other issues likely to come up in their talks will be the future of the Iranian nuclear deal, of which Russia is one of the signatories, and the Israeli-Palestinian conflict.

On Monday morning, Netanyahu will fly on a small plane to the Russian capital, and return to Israel several hours later. [ Source: Times of Israel (Read More…) ]