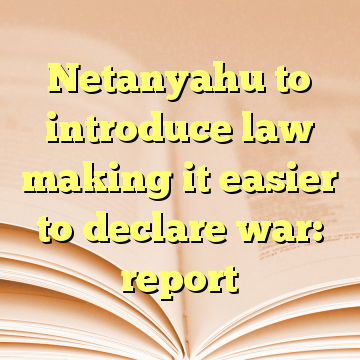 (Worthy News) – Israel’s Prime Minister Benjamin Netanyahu is promoting a legal amendment that would give him more leeway to declare war without consulting the full cabinet, Channel Two reported Sunday.

The report said that Netanyahu intends to introduce legislation to the Knesset after the summer recess that would allow him to declare war – or a military operation that could trigger a war – without the prior authorization of the entire cabinet, but rather just the security cabinet.

Netanyahu reportedly covets the change, which would require amending one of Israel’s Basic Laws, in order to prevent leaks from the full cabinet. [ Source (Read More…) ]