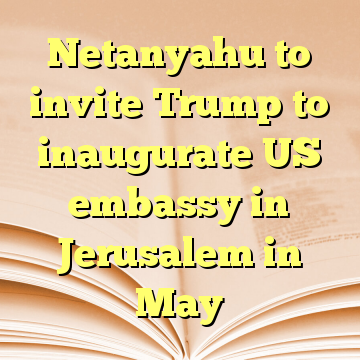 (Worthy News) – Prime Minister Benjamin Netanyahu is expected to invite US President Donald Trump to Israel in May to inaugurate the US embassy, which Washington announced on Friday will be relocated to Jerusalem on Israel’s Independence Day, Hadashot TV news reported on Saturday.

In a video statement posted to his social media channels on Saturday night, Netanyahu said the US announcement to relocate the embassy, which follows Trump’s historic declaration in December to recognize Jerusalem as Israel’s capital, marked a “great moment for the State of Israel.”

“The decision by President Trump to relocate the US embassy to Jerusalem on the coming Independence Day, will make the celebrations even more joyful,” said Netanyahu. [ Source: Times of Israel (Read More…) ]