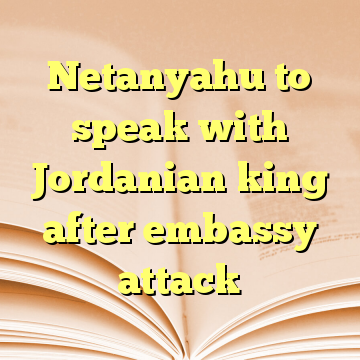 (Worthy News) – Prime Minister Benjamin Netanyahu was expected to speak by phone with Jordan’s King Abdullah on Monday in an attempt to ease tense relations between their two countries after an attack at the Israeli embassy in Amman, Channel 2 reported.

Late on Sunday night, an Israeli security officer at the Israeli mission in Jordan was stabbed in the stomach by an assailant with a screwdriver. According to the Foreign Minister, the Israeli guard responded to the attack by shooting the attacker, killing him and another Jordanian in the vicinity. [ Source:Jerusalem Post (Read More…) ]