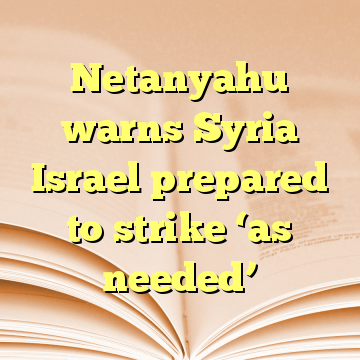 (Worthy News) – Prime Minister Benjamin Netanyahu on Monday warned Syria that Israel would continue to carry out airstrikes “as needed” after the Israeli Air Force destroyed a Syrian anti-aircraft battery in response to the firing of an interceptor missile at Israeli reconnaissance planes.

“Our policy is clear: Anyone who tries to hurt us, we will hurt them,” he said in a statement. “Today, they tried to hit our planes — this is not acceptable.”

“The air force acted with precision, swiftness and destroyed what needed to be destroyed,” Netanyahu added. “We will continue to act in the arena as much as needed to defend Israel’s security.” [ Source: Times of Israel (Read More…) ]