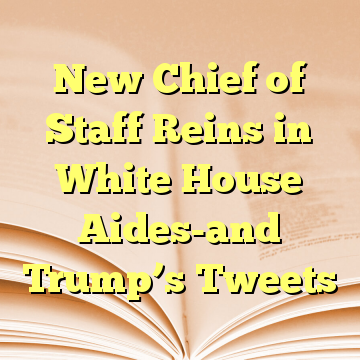 (Worthy News) – On his fifth day on the job as Donald Trump’s new chief of staff, John Kelly gathered about 200 White House aides for a meeting where he spelled out in blunt terms the way things are going to work in the West Wing he now oversees.

The retired Marine Corps four-star general said he didn’t care whether they had been part of the Trump campaign or had joined the administration from Capitol Hill or another corner of the political world, according to people who attended the meeting. They all work for the president now, he told them, and they had to act as one team.

Echoing the Marines’ credo of “God, Country, Corps,” Kelly said he expects all of them to put country first, the president second, and their own needs and priorities last. He stressed work ethic. And he sharply warned them against leaking, an obsession of Trump’s. Even if it may seem innocuous to pass along some bit of classified information to someone without a clearance, he said, it’s a crime. [ Source: Bloomberg (Read More…) ]