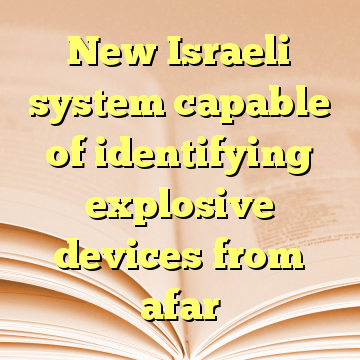 (Worthy News) – The Israel Aerospace Industries (IAI) has recently completed the development of the Counter Improvised Explosive Device and Mine Suite (CIMS) mobile system, integrating optic sensors with radars to expose roadside charges before military forces ever go near them.

This new Israeli innovation will be able to protect soldiers against explosive charges as they cross hostile areas in times of battle or operations.

The system is mainly designed to be used by patrol forces undertaking routine security measures near the borders such as route openings and suspicious object inspections. In addition, the system can also assist armored and motorized infantry forces’ land maneuvers.

The new hardware may be installed on a variety of vehicles, from hummers and soft defenders intended for routine patrol tasks, through gunfire-protected vehicles and ending with armored vehicles such as tanks and APCs. [ Source:Ynet News (Read More…) ]