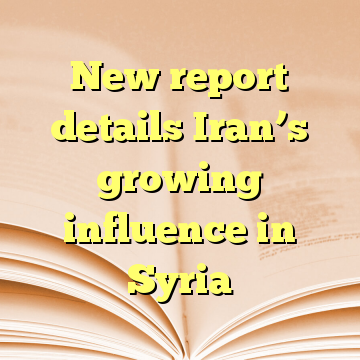 (Worthy News) – Growing Israeli concern over Iran gaining an ever increasing foothold in Syria has been impossible to miss lately, as evidenced by the prime minister’s statements along those lines. Mossad Director Yossi Cohen also alerted the government to the fact that Iran’s influence in Syria in particular and the region in general is growing stronger by the day.

In light of these events, and moments before Prime Minister Netanyahu’s next meeting with Russian President Vladimir Putin, one of the more prominent figures shaping events in Syria, intelligence analyst Ronen Salomon has put together a project trying to trace the presence of Iranian forces in Syria.

Salomon’s research shows that Iranian presence is shoring up its presence in Lebanon through the Islamic Republic’s Revolutionary Guard’s Quds Force, headed by General Qasem Soleimani. This military-intelligence body works in tandem with the Guard’s intelligence division to carry out operations outside of Iran, with the assistance of the Ministry of Intelligence and other ministries and agencies. [ Source (Read More…) ]